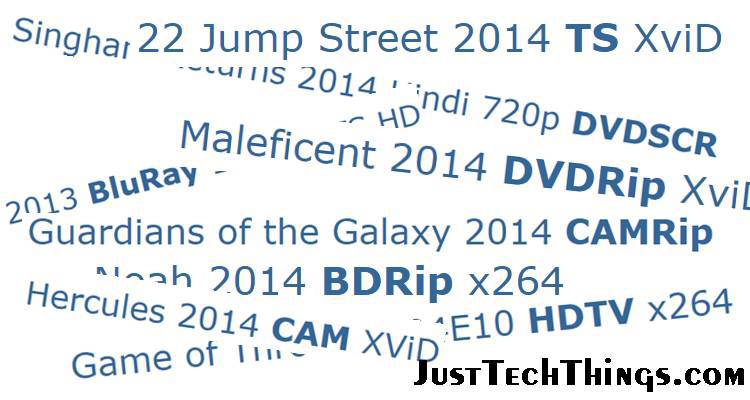 What is the difference between Blu-ray, Dvd, DvdRip, CAM, DVDScr, Webrip and BRRip ?

If you are a movie maniac and love watching movies at home by downloading them illegally by torrents or any other warez websites, you would read terms like DvdScr or Bluray very often. In this article I will be discussing about these formats and usage.Those who dont encounter terms like CAM, DVDScr, Webrip, BRRip, BDRip, DvdRip, TS Rip, HDTV, Web Rip, Web-DL etc in their daily lives, you should be knowing that all these are different types of pirated movie release formats.

So without wasting some more words, lets start with the CAM print followed by several other formats or release types.

A cam is a theater rip usually done with a digital video camera. A mini tripod is sometimes used, but a lot of the time this wont be possible, so the camera make shake. Also seating placement isn’t always idle, and it might be filmed from an angle. If cropped properly, this is hard to tell unless there’s text on the screen, but a lot of times these are left with triangular borders on the top and bottom of the screen. Sound is taken from the onboard microphone of the camera, and especially in comedies, laughter can often be heard during the film. Due to these factors picture and sound quality are usually quite poor, but sometimes we’re lucky, and the theater will be fairly empty and a fairly clear signal will be heard.

A telesync is the same spec as a CAM except it uses an external audio source (most likely an audio jack in the chair for hard of hearing people). A direct audio source does not ensure a good quality audio source, as a lot of background noise can interfere. A lot of the times a telesync is filmed in an empty cinema or from the projection booth with a professional camera, giving a better picture quality. Quality ranges drastically, check the sample before downloading the full release. A high percentage of Telesyncs are CAMs that have been mislabeled.

A telecine machine copies the film digitally from the reels. Sound and picture should be very good, but due to the equipment involved and cost telecines are fairly uncommon. Generally the film will be in correct aspect ratio, although 4:3 telecines have existed. A great example is the JURASSIC PARK 3 TC done a few years ago. TC should not be confused with TimeCode , which is a visible counter on screen throughout the film.

A pre VHS tape, sent to rental stores, and various other places for promotional use. A screener is supplied on a VHS tape, and is usually in a 4:3 (full screen) a/r, although letterboxed screeners are sometimes found. The main draw back is a “ticker“ (a message that scrolls past at the bottom of the screen, with the copyright and anti-copy telephone number). Also, if the tape contains any serial numbers, or any other markings that could lead to the source of the tape, these will have to be blocked, usually with a black mark over the section. This is sometimes only for a few seconds, but unfortunately on some copies this will last for the entire film, and some can be quite big. Depending on the equipment used, screener quality can range from excellent if done from a MASTER copy, to very poor if done on an old VHS recorder thru poor capture equipment on a copied tape. Most screeners are transferred to VCD, but a few attempts at SVCD have occurred, some looking better than others.

Same premise as a screener, but transferred off a DVD. Usually letterbox , but without the extras that a DVD retail would contain. The ticker is not usually in the black bars, and will disrupt the viewing. If the ripper has any skill, a DVDscr should be very good. Usually transferred to SVCD or DivX/XviD.

A copy of the final released DVD. If possible this is released PRE retail again, should be excellent quality. DVDrips are released in SVCD and DivX/XviD. Often after one group of pirates releases a high-quality DVD-Rip, the “race” to release that film will stop. The release is an AVI file and uses the Xvid codec (earlier DivX) for video, and mp3 or AC3 for audio. Because of their high quality, DVD-Rips generally replace any earlier copies that may already have been circulating. Widescreen DVDs used to be indicated as WS.DVDRip.

HDTV or PDTV or DTH (Direct To Home) rips often come from Over-the-Air transmissions. HDTV sources are re-encoded to multiple resolutions such as 640×352 (360p), 960×528 (540p), and 1280×720 (720p) at various file sizes for pirated releases. They can be progressive scan captured or not (480i digital transmission). With an HDTV source, the quality can sometimes even surpass DVD. Movies in this format are starting to grow in popularity.

TV episode that is either from Network (capped using digital cable/satellite boxes are preferable) or PRE-AIR from satellite feeds sending the program around to networks a few days earlier (do not contain “dogs” but sometimes have flickers etc) Some programs such as WWF Raw Is War contain extra parts, and the “dark matches” and camera/commentary tests are included on the rips. PDTV is capped from a digital TV PCI card, generally giving the best results, and groups tend to release in SVCD for these. VCD/SVCD/DivX/XviD rips are all supported by the TV scene.

A workprint is a copy of the film that has not been finished. It can be missing scenes, music, and quality can range from excellent to very poor. Some WPs are very different from the final print (Men In Black is missing all the aliens, and has actors in their places) and others can contain extra scenes (Jay and Silent Bob) . WPs can be nice additions to the collection once a good quality final has been obtained.

A DivX re-enc is a film that has been taken from its original VCD source, and re-encoded into a small DivX file. Most commonly found on file sharers, these are usually labeled something like Film.Name.Group(hosting site) etc. Common groups are SMR and TND. These aren’t really worth downloading, unless you’re that unsure about a film u only want a 200mb copy of it. Generally avoid.

The R5 is a retail DVD from region 5. Region 5 consists of India, Africa (except Egypt, South Africa, Swaziland, and Lesotho), Russia and former USSR countries. R5 releases differ from normal releases in that they are a direct Telecine transfer of the film without any of the image processing.

This is a movie or TV show downloaded via an on-line distribution website (web download), such as iTunes. The quality is quite good since they are not re-encoded. The video (H.264) and audio (AC3/AAC) streams are usually extracted from the iTunes file and then remuxed into a MKV container without sacrificing quality.
An advantage with these releases is that they mostly have no network logos on screen, just like BD/DVDRips.

This is a file ripped from a DRM-free streaming service, such as Hulu, CrunchyRoll or WWE Network. The quality is comparable to WEB-DL, but bitrates are lower to save on streaming bandwidth. The file will be extracted from the RTMP protocol and losslessly remuxed from a MP4 or FLV container to MKV.

A lot of films come from Asian Silvers/PDVD (see below) and these are tagged by the people responsible. Usually with a letter/initials or a little logo, generally in one of the corners. Most famous are the “Z” “A” and “Globe” watermarks.

These are films put out by eastern bootleggers, and these are usually bought by some groups to put out as their own. Silvers are very cheap and easily available in a lot of countries, and its easy to put out a release, which is why there are so many in the scene at the moment, mainly from smaller groups who don’t last more than a few releases. PDVDs are the same thing pressed onto a DVD. They have removable subtitles, and the quality is usually better than the silvers. These are ripped like a normal DVD, but usually released as VCD.

Blue-Ray BRRIP’s and BDRIP’s have been around for quite some time. These two are remarkable in the sense that they’re compatible with standalone home DVD players (with DivX/XviD support), XBOX 360, PS3, and other external peripherals.

These BRRip XviD and BDRip XviD files allow anyone to burn HD-quality Blu-Ray ripped movies on regular DVD media, and playback on most conventional DVD players – without the headaches of re-encoding or DVD authoring. There’s just one catch – you’ll likely need an HDTV to take full advantage of the superior video quality.

An XviD encode from a Blu-Ray release (i.e. a 1080p *.mkv file). A BD/BRRip in DVD-Rip size often looks better than a same-size DVD rip because encoders have better source material.

An XviD encode directly from a source Blu-Ray disk. A common misconception among downloaders is that BDRip and BRRip are the same thing. They differ in that a BDRip comes directly from the Blu-ray source, while a BRRip is encoded from a pre-release, usually from a 1080p BDRip from another group. BDRips are available in DVD-Rip sized releases (commonly 700 MB and 1.4 GB) encoded in Xvid or x264, as well as larger DVD5 or DVD9 (often 4.5 GB or larger, depending on length and quality) sized releases encoded in x264.

While both BRRips and BDRips are superior to DVDRips, they are normally released in 720p resolution, since standalone DivX (*.avi) players do not support anything higher than this anyways. They should not be confused with genuine Blu-Ray rips in 1080p, which are usually done in native Blu-Ray files, or as H.264 *.mkv files.