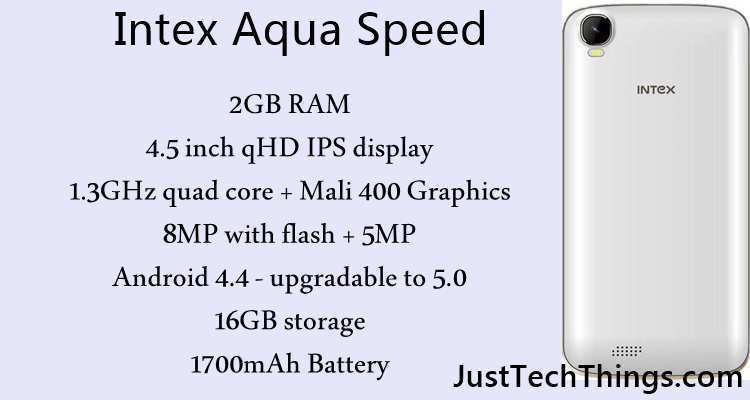 The domestic Smartphone maker Intex recently added the Aqua Speed to its stable to compete against the hoard of feature-loaded budget Android phones in the country. Priced at Rs 7,444, the Intex Aqua Speed is one of the most affordable Android phones in the market at the moment with 2GB of RAM. The phone offers a decent design, decent performance, and camera features for a budget.

If you are looking for a smartphone that offers decent features, but is not heavy on the pocket, then the Aqua Speed is a device worth considering. Listed below are the top reasons why one should buy the Aqua Speed.

The Intex Aqua Speed’s back panel features a sand stone finish, which makes the device resistant to smudges. There are various variants of the Aqua Speed on offer – white, coffee, grey, and black. The phone has a waistline of 8.95mm and is pretty lightweight at just 120 grams. The smartphone features a compact 4.5-inch qHD IPS display that offers superb one-hand operations.

The Aqua Speed runs Android 4.4 KitKat out of the box. However, the smartphone will receive Android Lollipop update in the coming months. The device offers almost stock Android experience as provided by Google. The Lollipop update for the phone will bring several new software tweaks like improved notifications, lock screen improvements, and more.

The Intex Aqua Speed is among the very few Android phones offer 2GB of RAM at this price point. It delivers decent performance with a 1.3GHz quad-core MediaTek MT6582M processor. The performance is further supported by a Mali 400 graphics processing unit. Overall, the Aqua Speed is equipped with decent hardware to handle heavy duty games like Asphalt 8 and Dead Trigger.

The Intex Aqua Speed is loaded with an impressive 16GB of internal memory, which lets you store a handful of movies, music, or anything you want on the device. If that’s not enough for you, the phone has a microSD card slot, which lets you increase the memory further up to 32GB.

Similar to the most Android smartphones in this range, the Intex Aqua Speed is equipped with the regular set of connectivity options. The device offers dual-SIM slots, 3G, Wi-Fi, Wi-Fi Hotspot, Bluetooth 4.0, micro-USB port, and GPS. The device is fuelled by a 1,700mAh battery, which is rated to deliver five hours of talk time and 180 hours of standby time on 2G networks.

The Intex Aqua Speed offers a compact display, latest software, decent gaming experience with 2GB of RAM, splendid 16GB of internal memory, and decent camera specs for a budget. As mentioned above, the device is officially priced at Rs 7,444, but can be grabbed from the online stores for as low as Rs 6,699. Buy Intex Aqua Speed from snapdeal – Lowest Price. The phone’s upcoming Android Lollipop update is another good reason to go for it. It’s worth mentioning that the brand has recently launched the slightly upgraded Intex Aqua Speed HD for Rs 8,999, which offers a slightly bigger 4.7-inch display, but the rest of its specs are similar to the Aqua Speed.